An interview with Meredith Talusan, author of the story Crosscurrents (BLR Issue 43)

BLR:  You have been a journalist and memoirist: the first trans staff writer at BuzzFeed, winner of a GLAAD and Al Neuharth Award for investigative journalism, author of an acclaimed memoir, Fairest. How did you come to write fiction? What does fiction do that journalism and memoir can’t? Especially in a climate where trans lives have, in many instances, become politicized?

Meredith Talusan:  I think of my fiction as an extension of my impetus to write Fairest as a memoir that tries to capture my experience, and therefore an intersectional trans experience, on my own terms, after a substantial career as a journalist centering trans people, yes, but doing so in a world dominated by cisgender society and perspectives. Fiction allows me to further portray realities from perspectives outside the majority, not just at the level of my lived experience but in terms of a broad range of possible trans, BIPOC, immigrant, and disabled experiences.

BLR:  In your story “Crosscurrents,” a whitepassing trans woman begins a relationship with a Black man. As she gets to know him, she can’t help but think of statistics: “He’s Black like nearly all the men who’ve killed trans women in America, most of whom were their victim’s lovers.” She follows with the thought, “Most of those women were Black too.” How did your past work as a journalist inform the trajectory of this story?

MT:  I, in reality, have done extensive investigative work on violence against trans BIPOC people, especially trans women of color. “Crosscurrents” came out of the realization that even as I was doing the important work of highlighting the lives of trans people who’ve died, our society still does so little to support and account for trans folks who are very much alive, including the enormous psychic and emotional toll it takes to be a trans journalist covering trans violence. I also wanted to speak to the difficult truth that living in a deeply racist and transphobic society makes all of us racist and transphobic, even when we’re trans and BIPOC ourselves. While very little of “Crosscurrents” is factually true, I wanted to express the more deep-seated truths and paradoxes that come with being exposed to so many of the terrible realities of being a trans woman of color in the U.S., not just externally as a journalist but through the deepest inner workings of a trans woman’s psyche.

BLR:  Your story stands out for its acuity—the precision with which you excavate moments, states of being. For example, your main character, Margaret, is at a bar and wonders “why a part of you still wants to be just straight and cis and white, when what you really want is to puke out your desire to be normal for good.” How do your stories originate—with an idea, character, or something else? Do you know where you want to land, or are you surprised by where the narrative takes you

MT:  Thank you. Over the years as I was working primarily in nonfiction, I’ve made mental notes about situations, characters, or even just notions that I felt could somehow form the basis for stories. When I sit down to write, those mental notes tend to coalesce at an unconscious level and often connect to each other in ways I almost never anticipate, and lead to other situations that fall outside the boundaries of anything even close to what I’ve experienced. I’ve learned that my unconscious mind leads me to places my conscious can never plan, so I usually just let it loose and what it comes up with always surprises me.

BLR:  Is there anything else you’d like us to know about your process in writing this story?

MT:  This story comes directly out of working with a former student of mine, Tyler Spicer, in Antioch’s low-residency program (where I no longer teach, alas, but students can work with me at Sarah Lawrence). I suggested that a second-person story they wrote might work better if it’s in first-person, and they astutely asked me what makes one point-of-view more effective than another. It occurred to me then that I’d never written a second-person story so I couldn’t answer their question with much authority, so I decided to write one to figure out my opinions about second-person POV. For me, the second-person has this wonderful way of simultaneously creating distance and intimacy, of portraying characters who want to feel removed from their day-to-day reality, yet that very act of distancing brings the reader so much closer to the deep recess of a character’s inner struggles. I love it so much when these types of technical choices lead to fundamental differences in how we perceive stories and characters.

Order a copy of Meredith Talusan’s Fairest through BLR‘s Bookshop. 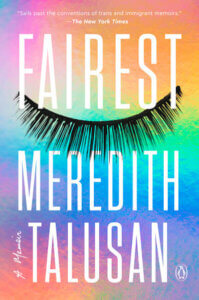 Get notified about exclusive offers every week!

My Friend in Flapping Stages Tries to Take Flight